Author Octavia Butler predicted much of what is happening today 30 years ago. She draws a gloomy but not hopeless perspective. 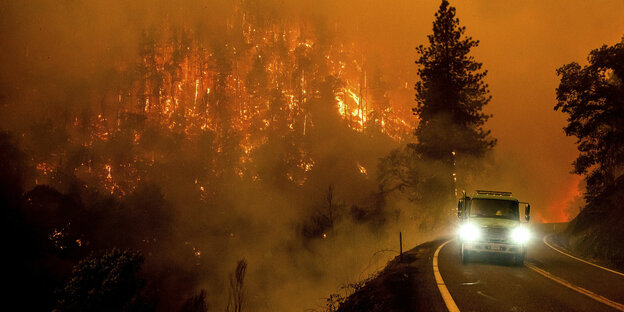 The end of the world is coming. Most likely. Because we as humanity are far from taking the necessary steps to avert the climate catastrophe and the associated social consequences. However, the downfall will not look like we imagine it in books and films: the ground shakes, the sky darkens, lamentations and cries of pain ring out everywhere, the earth opens up and swallows up large and small, old and young, rich and poor without any difference.

No, it does not come suddenly, but in waves and at different times. It affects regions and people unequally. The science fiction author Octavia E. Butler described this very realistically in her “Parabola Series” in the 1990s. If you want to know what our dystopian future might look like, you should read these books. In it she describes a “ climate change ” that will lead to deadly heat waves, water shortages, burning forests and violent storms in California in the 2020s, among other places.

Sounds familiar, doesn’t it? The main character Lauren lives in a small community that protects itself from aggressive gangs with high walls and guns. Those who have money protect themselves with barbed wire and electric fences, pay the police, who are only interested in the rich, or hire armed security services. Money also makes it possible to move to Canada or Russia, where the climate crisis has not hit so hard. The economy, state and social structures still function there.

Water is not constantly getting more expensive there. Without money, an escape is hardly feasible. The borders are closed, the way is life-threatening. The dangers intensify as the US launches a war against Canada and breakaway Alaska. If you don’t have money, you’re vulnerable. That’s already the case today. But when the world collapses around you, that vulnerability becomes acute danger. Poor women in particular fear the permanent threat of sexualised violence .

A few ruthless and insane people are enough to set in motion a dynamic of distrust and fear and with it a spiral of violence. Butler’s descriptions are realistic. After all, the end of the world due to the climate catastrophe has already begun, even if it hasn’t hit us that hard here yet. In some parts of the world, temperatures rose to as much as 60 degrees this summer. Such heat waves will come more and more often.

Not slowly and steadily, but in bursts of waves: there will be summers that will be less hot, with fewer and less severe wildfires. People who don’t want to know then say: “Well, it’s a cool day, it’s not all that dramatic!” Next summer, however, new heat records will be broken again, new fires and floods will destroy entire regions. It hits the old harder than the young, the sick worse than the healthy, the poor worse than the rich.

The associated economic crises favor political crises, violence and fanaticism. Butler describes a shift to the right. The US elects a president who calls for “America First” and a radical conversion to Christian values. He agitates against those who think differently and minorities. Some of his followers are violent. This President denies it or claims to have nothing to do with it. Many hope that a strong hand will restore order in the country.

With this authoritarian leadership come people who abuse the power that comes with it. Self-proclaimed, heavily armed “crusaders” raid, rob and even enslave vulnerable groups such as refugees and the poor. They do this with the help of a “smart” collar that causes terrible pain at the touch of a button and denies the enslaved any opportunity to resist.

Although slavery is still officially forbidden, the relevant laws have been weakened over time to such an extent that human and civil rights can actually only be claimed by people with money. Probably not exactly like that, but it’s going to be similar. Civil rights will be seen by many as decadent nonsense in the face of doom. At least as long as they themselves are so privileged that they do not have to take advantage of them.

Poor people are worse off

People who already either don’t care or hate protecting the vulnerable will struggle to assert themselves. The polarization that is already much lamented today will increase above all where the situation is particularly bad. Eco-terrorism will increase in the future. People who already see themselves as victims of fascist terror because they are held up for half an hour by a sit-in will then completely freak out and some will certainly become violent.

This will create a spiral of violence, just as Butler describes it. No negative image of man should be drawn here. Most people are basically good. The problem is that negative dynamics can be set in motion by bad events and a few very aggressive actors. It will not happen at the same time and to everyone. But it will happen. More frequently.

Or we as humanity still manage to organize ourselves in such a way that we create a good future for everyone. Butler also reports on this in her books. Namely, Lauren founds a new, very sane religion and joins forces with others in a free and friendly community. Something like that is also possible. More likely is the coming, non-simultaneous and unjust end of the world.