Collective instead of collection

While at H&M and Co. a new collection – painted green – is waiting for consumers almost every week, the wardrobes are getting fuller and nobody knows the right amount of how much you actually need, a small collective in the Neukölln district shows us that clothes can also be exchanged and repaired.

In front of the brightly painted and postered shop windows of the trial & errors project room, a few people are already waiting for the doors to open. When 4 p.m. struck, the key turned and everyone pitched in. The clothes rails are rolled to the curb and both the clothes rummaging table and the green donation box find their place next to the entrance. The barter shop is open – let’s get started. Neighbors of all ages stroll comfortably through the shop.

Shelves and closets house hundreds of items of clothing, carefully folded in their designated places. On the right is another large table, at which a volunteer sits, who is fumbling with concentration on a piece of clothing, but always lifts his head and greets warmly when new visitors enter. Behind him are sewing machines and colorful spools of thread on the shelves. A CD player plays quietly to itself and you immediately feel at ease. 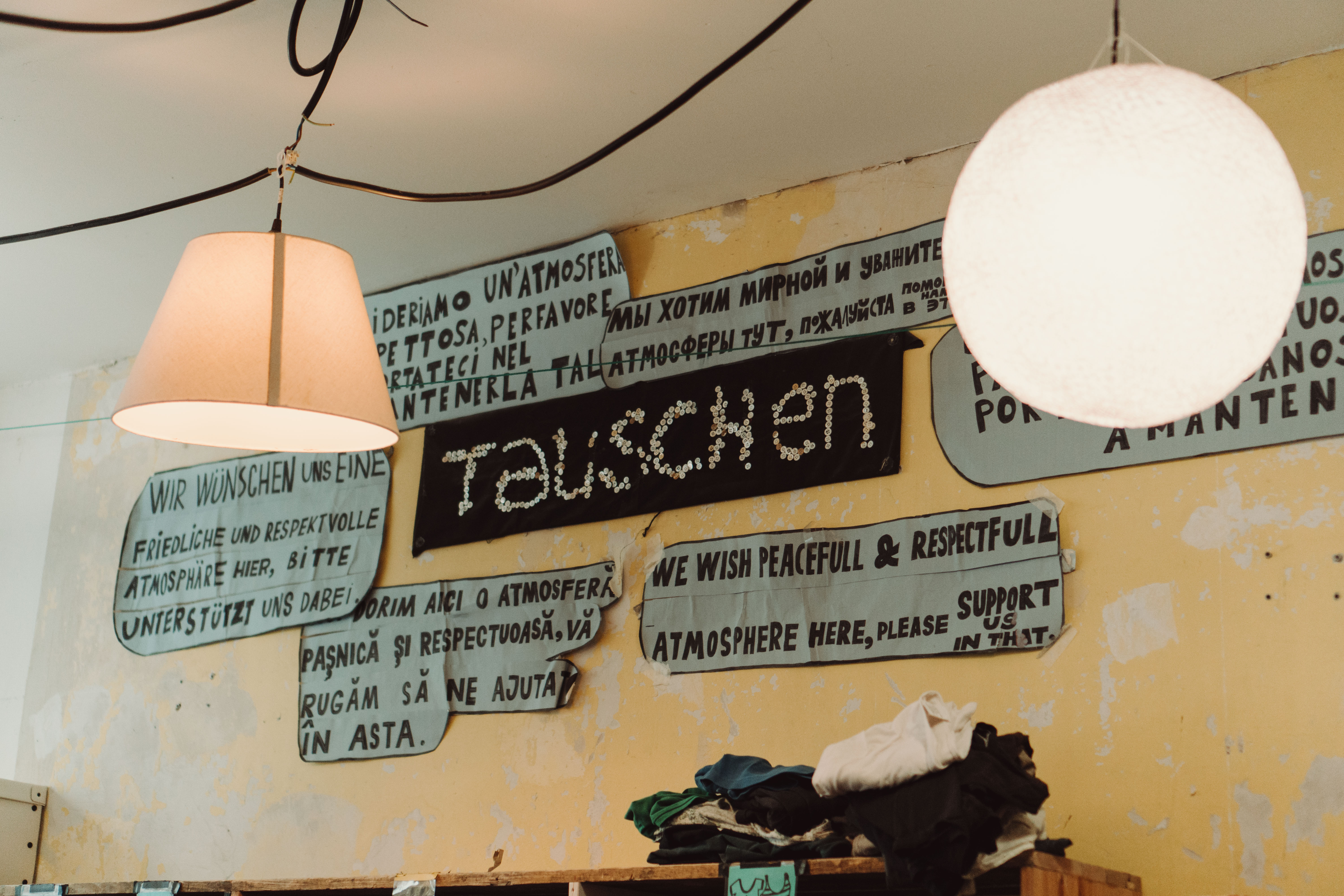 On two mirrors is written in blue, squiggly cursive “Wunderbar!” and in bold capital letters “SCHÖN! :)”. These sentences are intended to trick the critical look in the mirror. Small posters in six different languages ​​hang above the clothes rails, asking for a peaceful and respectful atmosphere. That works too.

What is striking is the calm that some of the barter shop visitors radiate and the naturalness with which the clothes they have brought with them are placed on the appropriate shelves. Everyone feels responsible for the shop and appreciates it. “That’s essential for us as a collective,” explains Jule later, who has been part of the collective for seven years. The employee who was still sitting at the table a few minutes ago is now holding up a pair of white and purple patterned trousers from the rope damage. The button is missing, but it shouldn’t fail because of that. He pulls out a small bag full of buttons. You have to sew it yourself, but if you know the collective, you’re no stranger to DIY. So the life of the trousers is far from over.

The idea for trial & error came about in 2010 at the RecycledCreativity Festival . The founders Rutha Vimba and Julia Vernersson had the vision to professionalize the theme of the festival – “upcycling” – and to create a space where you can try things out without fear of failure. Trial and error – trial and error. For Vimba and Vernersson it was clear from the start that making mistakes is an essential part of personal development and that you can only try things out if you don’t have to avoid making mistakes at all costs. Trial and errorsince then has organized a wide variety of projects. In addition to the swap shop, this also includes a textile laboratory in which the “Textile” repair café is housed. As a distributor of the voluntary organization foodsharing – a network to distribute food that would otherwise end up in the garbage – trial & error savesweekly fruit, vegetables etc. and snips and cooks together under the name “Schnippeldisco”. Workshops with a sustainable focus are offered for those who are curious and publications are made available on the website. The aim is to break down knowledge hierarchies and pass on skills: “The idea of ​​Creative Commons is important to us, which is why we say: knowledge must be shared, knowledge should grow and be able to develop further. All this is limited by a copyright.”.

For the people behind trial & error and who are part of the core team, this always means a lot of work. Only four active adults are currently working there, some of whom have been with us for a long time. In addition to this core team, neighbors help on a voluntary basis, mainly with the barter shop and food sharing. The association currently employs two EVS employees (European Voluntary Service) and one BFD employee (Federal Voluntary Service) in the team. The collective relies on voluntary help and finances its projects and premises through donations, external funding, renting out the room and membership fees.

The team organizes itself in plenary sessions that take place weekly and monthly. At the so-called Monday meeting, the main focus is on planning the respective week and discussing who will take over the next shift, for example in the barter shop. 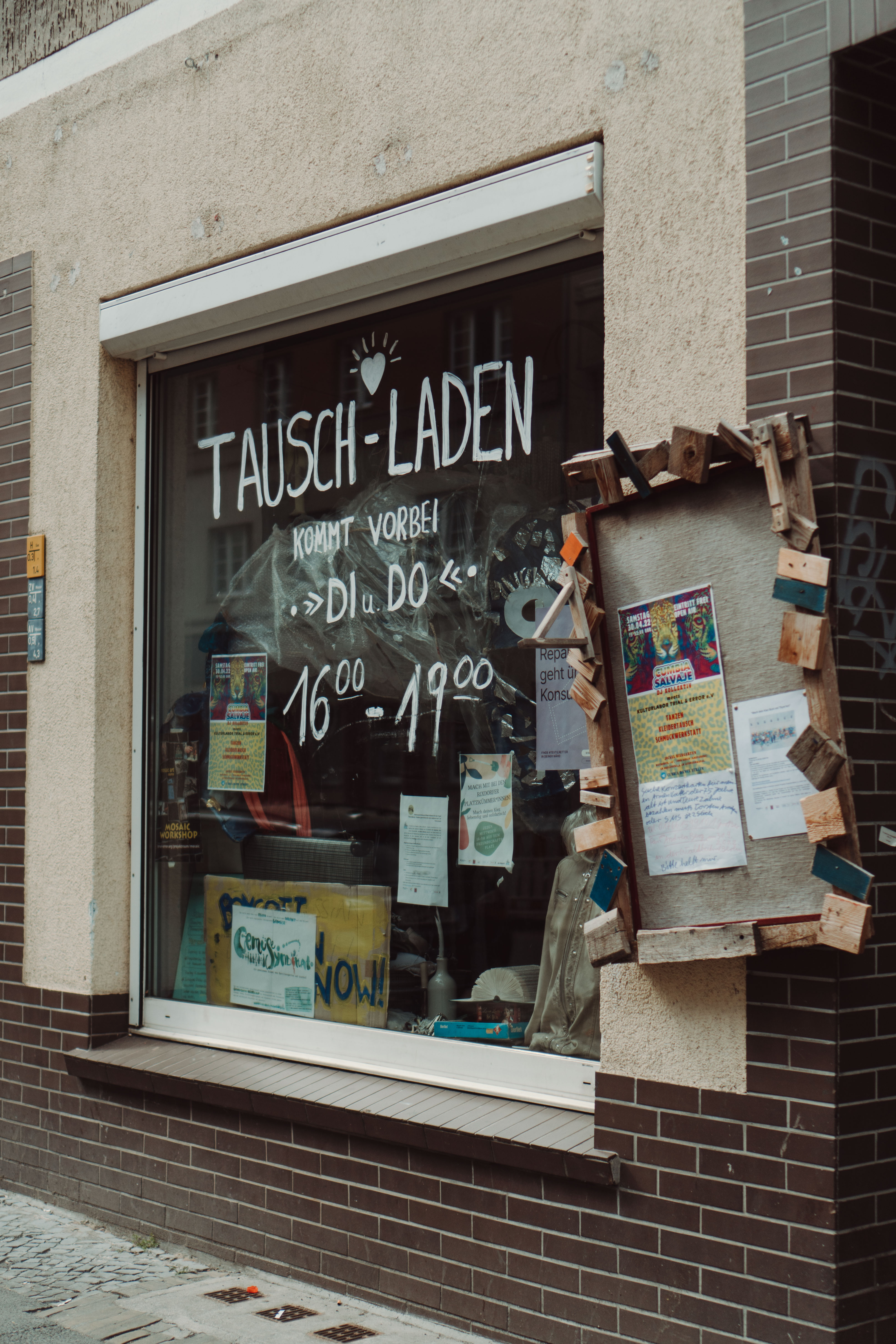 The swap shop takes up a large part of the work of trial & error , because the idea of ​​swapping instead of buying – and that works wonderfully with trial & error – conserves resources, which is very important to the collective. Textiles that have already been produced, such as the patterned trousers, should not be thrown away or forgotten, but given the chance of a second or even third life through the twice-weekly barter shop – provided someone falls in love with the item of clothing and takes it with them. This is also well received in the neighborhood. If you need some new clothes, come here and swap them – free of charge. If you can donate, anonymously put a few coins or bills in the donation box. Even if trial & errorIf you want to show alternatives to capitalism and establish local cycles, you still have to pay the room rent. However, bartering and donations are not seen as strictly: If you don’t have any money and urgently need clothes, you don’t have to bring anything to barter with you and you don’t have to pay either. The collective wants to create a solidary, non-discriminatory space in which people can network, exchange ideas and support each other.

“I coordinate the textile laboratory as a large project with two others from our collective. Also a neighborly project, which is about living together in the Richardkiez. The revitalization of public spaces is important to us. For example, we do pop-up projects and plant swaps. And I’m also involved in food sharing,” says Jule. Since no large fees can be paid, he worked for a while in a socially insured part-time job. “That’s how many people who are active with us do it,” reports the 36-year-old.

Seven years ago, Jule was looking for ways to swap clothes for her daughter and came across trial & error . The barter shop mainly sells clothing for adults, which is why Jule helped organize the children’s clothing exchange that she wanted. Since then a lot has happened. The collective traveled across the neighborhood several times until they discovered the premises on Braunschweiger Strasse, where they were able to devote themselves to their creativity, which is committed to sustainability – and still do. In addition, the collective has grown since then and has become better known, and when trial & error grows, the rooms have to be changed, like the clothes of a growing child.

Even if the collective has existed for more than a decade, new faces regularly appear in the team and trial & error veterans withdraw because of their own family planning, the idea of ​​the guiding principles for which the collective should stand has not changed: experiencing self-efficacy by you just start and get active and get in touch with your neighbors – but also with people outside your own bubble – and experience community. These are also the reasons that Jule lists why her trial & error means so much, and she also raves about the good team structure and mutual support.

If the white and purple patterned pants ever break again in their new home, they will need to be repaired again instead of going to the trash can – and maybe on a Monday evening they will be lying on the tables of the repair café together with other favorite items and will be made chic again – for her third life.