“Fridays For Future” is allowed to organize a bicycle demo on the A7. But the group in Hildesheim had to make compromises. 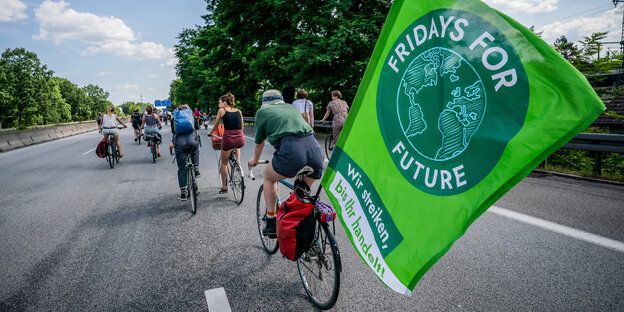 Soon also on the A7: there was already a bicycle demo on the Berlin city motorway in 2020Photo: Michael Kappeler/dpa

At first they weren’t allowed, but with a few changes they were: “Fridays For Future” received permission to protest with a bicycle demo on the A7 near Hildesheim. Last year, the Lüneburg Higher Administrative Court prohibited the demo. Now the activists have found a compromise in cooperation with the city of Hildesheim and the police. What does this mean for the protest?

The activist group “Last Generation” has recently been increasingly criticized for demonstrations and blockades on freeway ramps. She is accused of blocking emergency vehicles, coercion or extortion. Justice Minister Marco Buschmann even called the sit-in protests illegal. The legal classification of this form of protest is not that easy from a legal point of view.

Freedom of assembly is paramount. Although it is enshrined in the Basic Law, it can be restricted under certain conditions. A central role is played in road blockades by second-tier jurisdiction. She describes deliberately stopping the first row of waiting cars in order to set up a physical barrier for the following motor vehicles as an act of coercion.

If the blockades move in the sense of freedom of assembly, the fact of coercion is still given, but the physical blockade of the cars from the second row is no longer illegal.

The highway is officially closed

The Federal Constitutional Court writes as a specification for the resolution of such actions after a precedent in 2004: “Important weighing elements here are the duration and intensity of the action, its prior notification, alternative options via other access roads, the urgency of the blocked transport, but also the factual connection between the in persons impaired in their freedom of movement and the object of the protest.”

The interpretation in individual cases is possible within a relatively large framework. Even if the demos against food waste by the “last generation” always raise the question of the material reference, the legal scholar Tim Wihl argues in a guest article for the legal magazine LTO that there is a kind of “permanent emergency” especially in the climate crisis. In the climate emergency , the factual reference could be justified by the fact that the object of protest is omnipresent in society.

With the agreement with the city and the police, however, the activists have circumvented the legal dispute: the motorway is officially closed, traffic can easily bypass the area with a detour of about ten minutes.

Demo on Sunday instead of Friday

The fact that the protest was now approved was justified by the city with the new time of the action, reports “Fridays For Future”. In 2021, the demo was still planned for Friday afternoon, but now they want to start cycling on Sunday, July 10th at 9.30 a.m. with 600 participants at Hildesheim Central Station. It’s about three kilometers on the A7, until 11 a.m. at the latest, motorized traffic is allowed to drive unhindered again.

The group chose the route via the A7 “to give our demand for a traffic turnaround more emphasis,” Vera Wagner from “Fridays For Future” Hildesheim told the taz. They also hoped to attract new participants with this form of protest. After all, cycling on the autobahn doesn’t work every Sunday.

The fact that the protest will not hit too many cars on a Sunday morning and that a detour is possible due to the route is the price for the city permit. Stop the climate crisis yes – but please only on Sunday. After all, nobody has to deal with the interpretation of the right to demonstrate anymore.